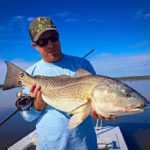 Captain Rob Aldridge grew up on the barrier islands of the southeastern North Carolina coast. He spent the majority of his younger days fishing the surf, bays, creeks, jetties, and any other place he could wet a line. Most weekends were spent offshore fishing with his father or honing his ability to locate and catch inshore species with friends and the local old salts in and around the mouth of the Cape Fear River.

In 2003 Rob moved to northeast Florida to attend law school. After a year of Law School he realized his calling wasn’t in practicing law, it was for his love of the ocean, the natural beauty of our marine ecosystem, and of course, the fish. Since 2004, Captain Rob has been extensively fishing and guiding in the fertile waters of Coastal Georgia as well as North East Florida, from the St. Simons Island Georgia area to St Augustine Florida.

In 2008, Captain Rob began his tournament fishing career partnering with Captain Scott Owens. Captains Rob and Scott participated in the Walmart FLW redfish series, the HT series events, as well as the IFA redfish tour. Since April of 2008, Captain Rob and Scott have racked up 1 win, multiple top 5 and top 10 finishes, as well as the IFA Eastern Division Team of the Year Title in 2008.

Although he has rarely fished any pro tournaments since 2010, Captain Rob is a regular participating guide in the Redbone celebrity tournament series that is dedicated to catch the cure for cystic fibrosis, and is a regular at the top of the leader board with multiple awards in 2013 and 2014, including artificial division champions, guide to team Grand Champions, and guide to Grand champion Angler.

Captain Rob has been featured on Versus, ESPN, WFN, Fox Sports south, and Fox Sports Florida for his tournament and guiding success. Captain Rob is committed to sharing his knowledge and skills with each of his clients, and teaching customers of all skill levels to be better anglers in our unique fishery here in Coastal Georgia. Captain Rob provides top notch equipment for his clients and is endorsed by leading names in the industry including Islamorada Boatworks, St. Croix Rod Company, Quantum Fishing, Fin-Nor, Smith Optics, Orvis, Strike King Lures, Abel reels, Scientific Angler fly lines, Power Pole, Columbia Sportswear, Betts, Humminbird, Minn Kota, and Yeti coolers.

Captain Rob brings a lifetime of fishing experience to his clients at Southeastern Angling, and guides professionally full time here in Coastal Georgia as well as North Florida. He and Captain Scott also offer clients destination-fishing trips to the beautiful Florida Keys. Please Contact us for more information.