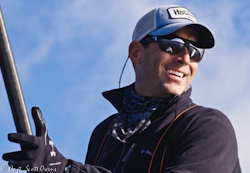 Captain Scott Owens is one of the most experienced and well respected guides here in Coastal Georgia and has been a key figure in pioneering shallow water sight fishing for redfish and tarpon.  He also continues to successfully guide clients to tarpon with the fly and has continued to put clients on fish other guides think impossible along the Georgia Coast. He offers a lifetime of experience in the fishing industry and close to 2 decades professionally guiding clients FULL TIME. He has been featured on ESPN, The World Fishing Network (WFN), Fox Sports, Versus, The Outdoor Channel, Destination America, and Sun Sports for his achievements while guiding and fishing tournaments. Some of these include shows like, Flats Class TV with host C.A. Richardson, Wild Instinct Outdoors,  Capt. Blair Wiggins “Addictive Fishing”, ESPN’s Saltwater Series, WFN Real Road Trips, and many others.

After growing up in St. Augustine Florida where he fished as a child and worked at a local tackle shop he moved to St. Simons Island Georgia over 27 years ago. Since ending a position as a very successful Account Executive in 2001 he has focused all his time on fishing and his clients. He has built and developed a very successful light tackle and fly fishing guide service and is known as the premier fly fishing and light tackle guide along the Georgia Coast.  Captain Scott Owens will provide you with a day on the water you will remember for the rest of your life.

Tournament
Captain Scott has donated his time for over a 9 years to be a part of charity tournaments such as the Golden Isles Red-Trout Celebrity Classic and The Savannah Redbone Celebrity Shootout, which help raise money to find a cure for Cystic Fibrosis. He and his clients have won numerous awards in both tournaments in 2002- 2011 including Team Grand Champions 7 out of 9 years in The Golden Isles Tournament and Team Grand Champions 2 years they fished the Savannah Tournament in 2005, 2006, and 2008. In 2007 he and clients took home the gold in the 1st annual Golden Isles SuperFly fly fishing tournament ever held outside the Florida Keys. He and his clients continue to dominate this great cause with success and have set 2 records in the entire tournament series. One was when his anglers caught and released over 300 redfish and trout in the 2 day tournament and the other is the highest ever score by any team with over 24,000 points. Both records were broke by anglers Stiles Kellett and Ethan Staats in the 2008 and 2010 tournaments.

Captain Scott is also a professional redfish angler where he and his tournament partner, Captain Rob Aldridge, have dominated the field with several top 5 finishes and wins in. They won the Cabelas Team of the Year award for their success in the 2008 IFA Redfish series and have also competed in the Walmart FLW, HT Pro circuit, IFA, and ESPN’s Oh Boy O’berto pro redfish tournaments.

He has written articles for Saltwater Sportsman, GON, The Redbone Journal, Elegant Island Living and continues to write to bring awareness to anglers on fishing habitat, techniques, and most important conservation.