We threw everything I had at a large school of fish yesterday morning as Roger Mast and I scratch our heads I decited to start up a creek here in georgia where it seemed the fish were headed. As we rounded the first bend I saw a large fish roll some popcorn shrimp alng the bank. As Roger pitched a Gulp around the oysters I started to do the same and all of a sudden was hooked up. The creek was littered with small redfish in the 10 to 12 inch range. Thats when Roger hooked up and a fish that at first seemed small started heading around the corner as the drag on the Quantum Cabo said you better start after thi fish. I jumped up on the platform and started to pole further up the creek and as I rounded the corner there they were a large mound of oysters ready to assist you know who in breaking us off. I told roger to tighten the drag and pull. As he did and we manadged to dodge the razor sharp oysters and a few min. later land the beautyful 30 inch 9.5 pounder who had made his way into a creek just as wide as my waterman. Great times!!! 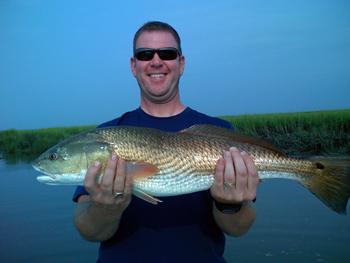 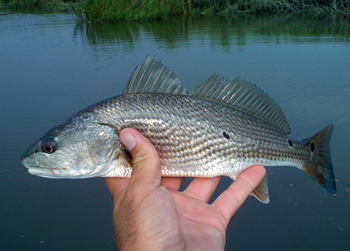