After wet testing the Ambush I can say that I was quite amazed at its stability and all around performance using it here in Georgia. I have been on many “micro” skiffs and find myself a lot of the time more worried about falling out than fishing. Here is what I found while testing the 17’7” skiff. It was rigged with a 25hp Tohatsu 4 stroke. There were 2 of us on board with a combined weight of no less than 425 pounds. As we idled out of the Oak Hill boat ramp and made the turn into the northern part of the lagoon. The boat bolted to a plain and we were off. It blasted through chop like its big brothers the 16 and 18 Waterman. As we ran across inches of water and got a feel for the skiff we cut several turns at around 90 degrees. The Ambush turns sharp and responds fast. As we came to a stop off a point we stood up and began to move around the skiff. Rob and I were amazed at its performance and now it was time to see how it would fish. Walking down the gunnels of this skiff is no problem. The deck is 58 inches and at the water line it sits 50.5 inches. It tracked straight and true in water to skinny for any respectable redfish to swim in. Over all I think the Guys at Gordon Boatworks have outdone themselves again. With a price point starting at around 18k it’s thousands less than other skiffs in its class. If you are a serious about shallow water fishing and would like to test drive the Ambush give the guys at the shop a call. Ask for Tom or Bobby which can be reached at (386) 345-1338. While at the shop make sure to take a tour and see the quality they put into every skiff. 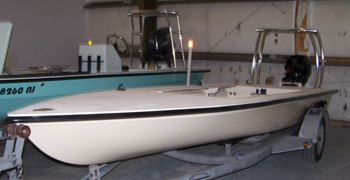 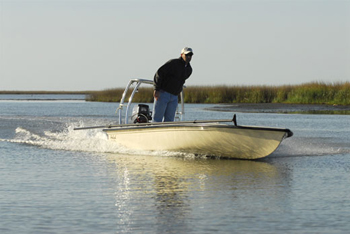 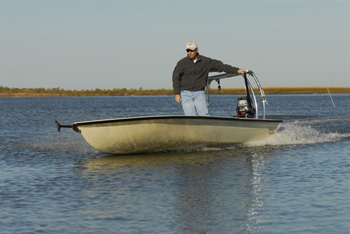