Well I have been back from the Keys for a week now and have been fishing every day in Georgia. Bait, Plug, and fly each day has been different and the fishing has been as hot as the weather. So here it is day by day.

We started out fishing the low tide leaving the dock at around 11am and casting jerk baits to cruising fish. It wasn’t long before we hooked up and then there was a double. I decided to cast out a chunk of blue crab and it didnt hit the water and a fish slammed it. Before I realized what I had done we were tripled up. After about 4 to 5 minutes we landed the first fish and then the other 2. We weighed the fish and had a combined 3 fish weight of 28.5 pounds. Joe smiled and said lets get another. We ended up with 8 fish on artificial and 6 on crabs. the bigest was 13 pounds!!! Way to go guys.

Wednesday Marius and boys
The day started a ittle earlier at 6 am and we headed out for some trout and redfish down around the beach at Cumberland Island. We smoked the trout down with around 70 fish landed 20 or so being trout and the rest being ladyfish, jacks, whiting, and redfish. It was a busy day on the big boat. I think I would rather pole the flats on a windy day than run shrimp back and forth from the bow to the back and over and over again. It was a blast and Marius and his boys were a lot of fun.

Thursday With Terry again
Wind and muddy water couldn’t stop the redfish and we smoked them down releasing several big fish around 8 to 10 pound and several smaller ones.
DROPPED IPHONE IN WATER LOST PICTURES

Friday 2 boat trip with Bruce and the guys and gals from the N. Guard
We had rough conditions with winds blowing out of the south east at around 15 to 20knts but Capt. Rob and I along with some hard core anglers fought the conditions to end up with lots of quality trout, redfish, and whiting. We even got a few nice sharks for the kids.

Saturday With Joe from Tuesday
Joe and a friend trough plastics at low water and again caught several big redfish in the 10 pound range. We caught some lady fish and saw a big school of tarpon on the way to the beach. We started looking for triple tail and it wasn’t long before we found them as well. we caught 2 and cast at another 10. It was a great day on the water as the winds laid down to 10 knts from the south west.

What a guy!!! Jared and his Wife to be were great!! I have a new respect for pro athletes. Jared spend his summers in Florida where he runs his Pathfinder 24 in search of tarpon, snook, cobia, and other unlucky fish. Jared is as much of a pro angler as a pro athlete. We started troughing plastics for reds where he and his gal caught around 10 fish 1 being just over 13 pounds. We then headed to another spot where Jared used his tall reach and the 7’6″ St. Croix rod to cast, hook, and fight several redfish over oysters which were just a few inches under the surface. Any one else that didn’t stand almost 7ft tall would have just been cut off. We had a great day and my hats off to Jared and his gal for everything he does for his home town and the attitude and respect he bring to the court and to the water. Thanks for a great day and you have a new fan. 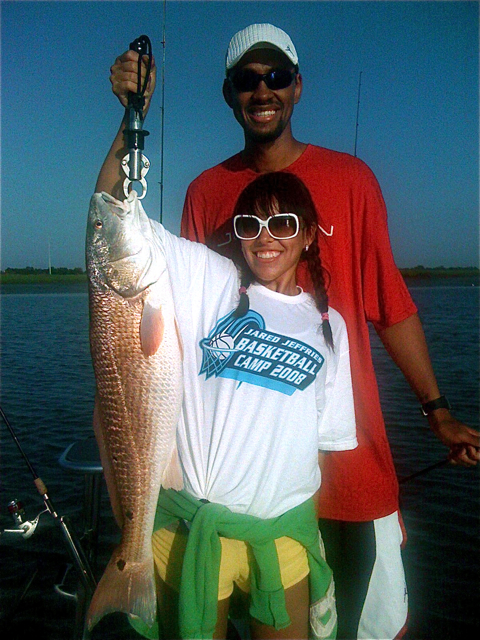 Monday with Tom Bennett
Tom put a hurting on the redfish and as we left one flat for another we kept on catching them. Tom caught serveral fish over 8 pounds and his biggers on fly ever. 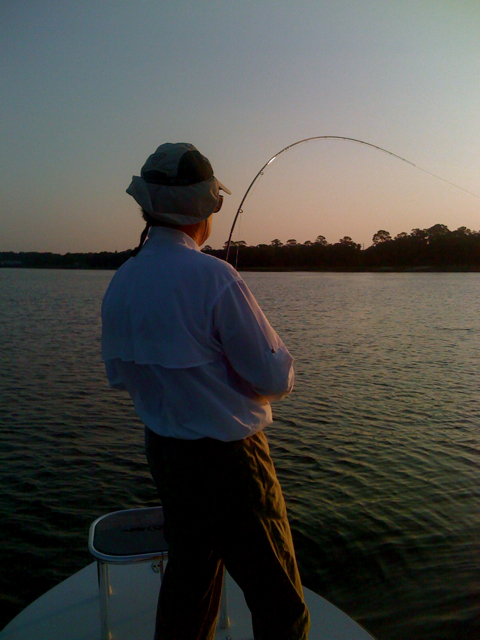 Tuesday With David Z. and Steven Oakley
These 2 guys had never fly fished in Salt water and the fish better fear them. They both adapted to the longer castes and bigger fish. We started out early leaving the dock before day light (5:45) and heading south for a 40 min boat ride. Lets just say by 11 am they had caught 7 redfish and were working on the triple tail. We caught 2 triple tail and went looking for a tarpon. We didn’t find them but we had one heck of a day. great day guyes. 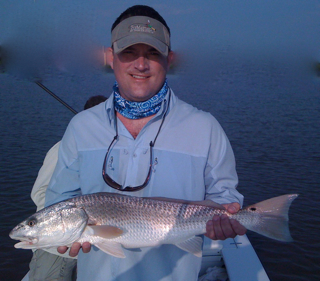 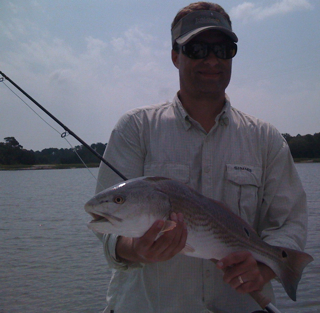