Well first came Fay which has turned the waters copper from Amelia down to around St. Augustine due to the flow from the massive St. Johns river. Then came Hana which hammered the east coast with rain and winds the day the tournament started.

Day 1 – There was some tough competition and even tougher weather conditions which lead to the postponing of day 2 until Sat. Thursday started out nice and as the day progressed the conditions got worse . Rob and I pre-fished the week leading up to the tournament and like most of the other teams had a plan which included fishing the flood tides which were getting bigger and bigger everyday leading up to TS Fay. However day 1’s weather was calm first thing and we got on fish first thing in the morning and really put them in the boat. I think we caught something like 20 or so but all were 23 inches or less except for the 15 pounder we caught the first cast. We ended up day one with 2 fish in the 22 to 23 inch range and knew that would not do it. At weigh-in everyone was saying we had good fish and it turned out we did. Those 2 fish put us in 4th place after day one. It seemed everyone else had trouble on day 1 as well.

Day 3 – Brought light over cast and some wind but it was a lot better than the 30 to 40kts winds the day before. Rob and I ran to our 1st spot and on the first cast we landed a respectable 26 inch fish. We though it was on until 6 hours went by with out a fish. We moved and power fished the ditch with spinner baits and crank baits. At 2:30 we doubled up with a nice pair of fish one 24 and one 23. We weighed both and like it should be the 24 was heavier. We continued to fish another 15 min. and then we made the run back to the scales. Our hard work paid off and we moved from 4th to 2nd place.

Day 3 – Judgment day – After an afternoon of camera interviews and photos we arrived at the dock around 5:30am. We were the 1st ones dockside and we sat waiting for our competition to arrive as they did shortly after. Then the camera crews arrived with an extra 200+ pound of gear. We were lucky we got the smallest guy in the group. I’m not sure if it was because we had the smallest boat of if the cards just played out that way. We did our morning interviews and headed out. The day was calm, hot, and clear. Great for sight fishing! We arrived at our first spot and the water was the color of 3 day old coffee with mud in it. We started down the bank and saw fish moving and feeding on bait. We move in on a school of fish and could not get a bite. We through everything in the boat at them and nothing no love for 2nd place. We moved to the intercoastal where we saw fish blasting baits out of the water and again no love. We decided to make a big move to Jacksonville and fish the little jetties where there can be some huge fish there this time of year. After 30 min. a 4 pound croaker and a gag grouper we moved again. This time to Browns Creek where Rob and I have caught nice fish. By this time it was 12:30 and the pressure was on. Both day 1 and 2 we had a fish in the boat by 7:30am and here it is almost 1pm with no fish!! We ran back to where we started and worked spinner baits and Fish Bites over the flooded oysters with no luck. After 2, 16 inch redfish and 15+ flounder we just couldn’t make it happen. We ended day three with no fish to weigh. At the dock we were not the only ones. Another team from Jacksonville had the same luck and we ended up falling back to our day 1 spot of 4th place. Rob and I had 3 great days of fishing and are very pleased with our 4th spot. We have fished 3 tournament this year so far with 1 win, a 4th and 10 place finish. Watch for us on Fox Sports Net (FSN) November 2nd 2008. Thanks for all your support and come let go fishing. 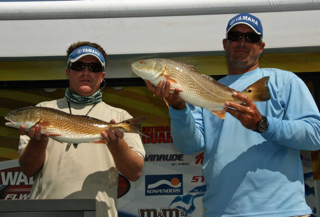 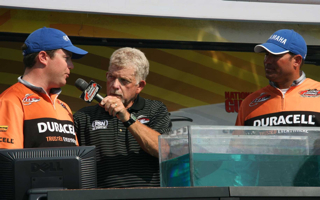 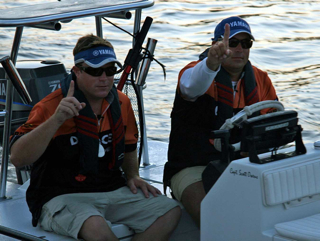