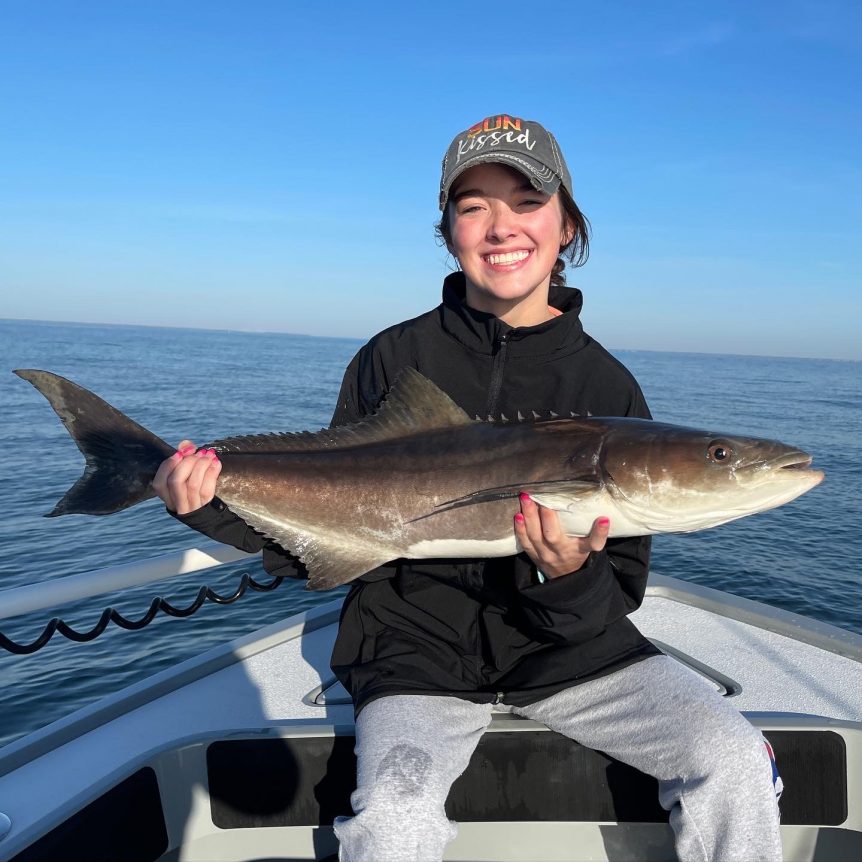 In this fishing report “Summer Wrap up 2022 June – Aug” we are going to talk about the summer season 2022 and how it has compared to previous seasons.  Summer seemed to start early this year with temperatures well into the 90s in early to mid May. Summer Fishing 2022.

I’m gonna take a minute to rewind just a little bit. I want to discuss a little bit about our early summer late spring fishing. We saw one of our worst seasons for triple tail here in the Golden Isles in 2022.  The season generally starts in mid March and runs through early June. It starts with site fishing them on the beaches until mid June. Then transitioning inland to the channel markers, pilings, and other structure in July through mid September.  Don’t get me wrong there are fish on the beach to catch all summer but the bulk of the fish do move inland.

With the catastrophic events following the Sep. 8, 2019 sinking of the Golden Ray, Disaster struck. Unthinkable amounts of petroleum pollution as well as other nasty chemicals inundated or fragile ecosystem. We saw a decline of fish in our fishery in St. Simons sound. The amount of noise produced from the salvage efforts for two years and the continuous pollution must’ve had a severe negative effect on triple tail as well because, over the last 2 seasons we have seen declines in fish numbers on the water.

I talked to countless salvage workers who had great vantage points high over the water who over the 2+ year said they could see triple tail around the wreck and on the many pilings that were put up for the so called pollution barrier.  Here Triple Tail would have been subjected to high levels of chemicals during the salvage including heavy bunk 6 fuel, gasoline, marine diesel, and all the other chemicals released from the massive almost 700ft ship wreck. 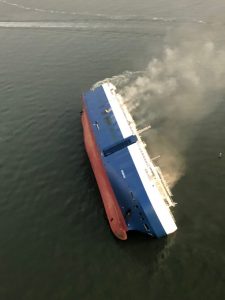 During the annuals Triple Tail tournament, local weekend fishermen and people from out of town were heard walking up and down the dock saying “why are there no triple tail”, “well that was a joke”, and my favorite “well at least we weren’t the only ones not catching fish”. The outcome was out of 30+ boats only 4 fish were weighed I was told.  That’s sad.

Lucky for the tens of thousands of people who enjoy the beaches and waters around Jekyll and St. Simons the Golden Ray is gone from sight. Unfortunately for our estuary it’s devistating destruction of pollution is  still very much present our waters, sand, soil, and mud and will be for who knows how many years. 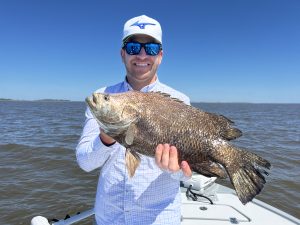 Moving forward to the Summer Wrap up 2022 June – Aug

Mid May brought warm water temperatures and by warm I mean temperatures in the coveted 75-80° range. This is the temperature that seems to trigger “all things migratory”.  Sharks, jacks, cobia, and of course Tarpon all seemed to show up earlier than usual. A client caught a couple cobia this year off the back of a Ray of Sea Island Beach in early April. It was so early that I called a biologist with the department of natural resources who forwarded it on to the people that study cobia migrations. His reply was wow that’s really early as I thought it was.  The ocean is like that. It doesn’t know days or months or years. It only knows currents, water temperature, how much light is in a day, and of course water salinity. 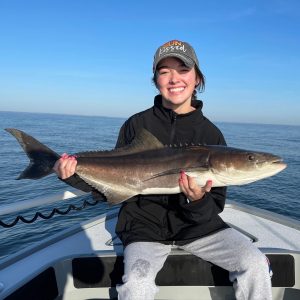 May 17th we loaded up 2 boats after and headed to St. Augustine. It was a short trip but much needed and was a nice treater everyone.

Our plans to fish around the inlet and bridge at night were over ruled by dinners and to many drinks during the day for any of us to feel confident to operate a boa. We skipped on those plans for some much needed rest and relaxation and to spend time laughing and having some fun.  An old friend surprised me and made the trip with his wife from NC and that was one of the best presents I got for the get together.  I had not seen Aaron in years and if you want to laugh the king of the one liners could make it happen.

You know know that I think about it I don’t laugh enough.  It’s something I need to work on for sure.  The last years have been filled with so many down and so few ups its been tough.  The one thing I consider an up is Dawn and Brady.  They have become my life and it’s great to have them both in it.  I can’t be more lucky and thankful.

It was a bit breezy the day we headed back north on the 3+ hour trip home form St. Augustine.  I had gotten calls about fish blowing up bait offshore and could not wait to stop and take a look.  We cruised hoe for a few hours and made the turn towards the inlet.  It was a bit rough but as I rounded the inlet into the ocean I immediately saw birds offshore diving and b-lined them.  As I arrived the ocean was alive Jacks, Sharks, and Tarpon were feeding aggressively on the frantic bait pod that was being ambushed from above and below.  I handed Dawn and rod and climbed into the tower. It was so rough it was hard for her to stand and I felt like I was riding a bucking bull in the tower.  Shots at fish were fast as the bait was moving north rapidly and the fish were coming from the depths under the fish feeding up.  We had a couple eats and decided to head back in for calmer waters and finish our journey home.

The next morning I picked up my trip at 7:30am and headed to fish.  It wasn’t great conditions and we had to fish inshore.  My clients were seasoned and I spend a bit on my calendar seeing who I could switch from inshore to Tarpon fishing.  As the week progressed the ocean got angrier and closed down for a few days.  It made inshore fishing torture knowing all those fish were on the beaches and in the ocean ready to be caught.

A few days ofter Mother Nature straightened up and the ocean laid down I headed out and rounded the corner into the ocean.  It wasn’t great conditions but we were going for it.  I remember Will telling me how much better the sound looked with the Goilden Ray gone and I could not agree more.  It had been an annoying conversation that caused morning anxiety the past 2.5 years.  It was then that I realized it was going to be a great day.

Working the beach and studying bait pods it was quiet.  The ingredients were there for the meal but the guests had not arrived.  I checked the tides and realized it was close to slack tide and suggested we go check out an area I like to fish early season around slack water.

We made the run and from about 1/2 a mile away I could see splashing on the surface!! I yelled down to my client from the tower “I hope you ate your wheaties”. He laughed and I knew he wouldn’t be laughing for long.  As we slowed down I looked at the bottom machine and it was lit up with bait and I deployed the trolling motor and went into stealth mode.

As I grabbed the fly rod out from under the gunnel and checked the connections he looked over and said did you see that!! I missed it but he said there was a large hammerhead right next to the boat. I didn’t like hearing that but the ocean is full of predators and today we were one of them.  With in min. I was back in the tower and on the lookout.  I could see fairly well as it was pushing noon by now.  I looked towards a slight splash and here they came from South to North. It was a string of 6 fish high and happy sliding from 10 towards the bow.  Will laid a cast out at 60ft and almost immediately came tight.  We were on!  That day ended with us landing 3 fish and jumping or breaking off 7 more, it was tarpon season. 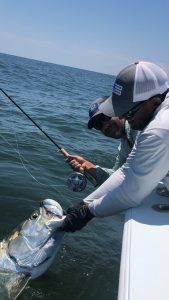 It wasn’t long and we were off to a great start when again Mother Nature closed the ocean.  It has always amazed me how a little wind can affect a big ocean.  After realizing the ocean was going to be out for a few days I focused on the Inshore creeks and flats. I got a call from a commercial crabbing buddy who informed me he had seen loads of tarpon “up river” we had had very little rain and my surprise the water clarity was much better than usual. I arrived in the area the next morning just after daylight and realize that what I thought was a slight wind chop on the water was wall-to-wall finger mullet and they were Tarpon- feeding on them so aggressively I could see it from half a mile away. This is not an ideal area to fly fish but it just happens that that day and the following week I had light tackle guys and Little did any of us know it was going to be mind blowing at the number of fish we hooked and landed.

After running from daily lighting storms and I do say “lightning” not thunder storms because they were some of the nastiest lightning storms I had seen our 5 day total was 19 for 51! Some days we only fished 3 hours and were run off the water and our catch percentage should have been better but I refuse to use treble hooks on plugs and have replaced them all with large J Hooks. There is nothing like trying to land a very pissed off 100 fish with a mouth full of treble hooks.  It’s really quite dangerous.

Its no secret even though people like to think it is that tarpon eat plugs and have been in the Altamaha river since before I was born.  My go to is the Bomber Long Shot or Long A.  Some guys like the Wind Cheater and others the rapala the last of which I have become fond of because they come with J Hooks pre rigged.  The idea is the water is stained or just dirty as hell and the fish can not only see the lure (tarpon have incredible sight) but feel it as well.  Anyhow we just hammered them and then the rivers flooded over their banks and all that fresh water traveled east and pushed they out to sea.

You can find the lures and tackle we use HERE