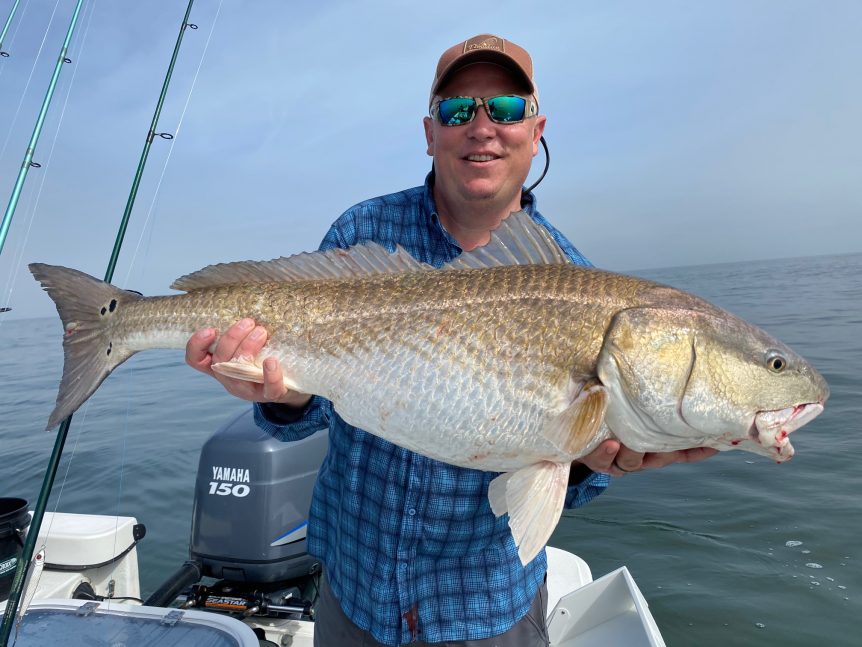 Just a quick post about the state of Georgia’s inshore fishery and my thought. Below is a transcript of the video and im sure it has some typos so please excuse them.

Good morning everybody. It’s Sunday, February 9th. already and we are blowing through winter time. I’m been getting a few questions about flying and some people think I’m out of my mind getting an ultra light and stuff, but you know I’m just trying to find some fish. I mean, you can only cover so much water and see so much in a day with our tide cycles. And you know, the Georgia coast, even though it’s an 80 miles long we make up one third of the salt Marsh, so there’s just thousands and thousands of miles of, salt Marsh, creeks, flats and everything else. So, um, yesterday we spent a big portion of the day, in the boat. I went out with captain Scott Dykes with Georgia light tackle and it was very disappointing. We fished North of Brunswick a long way, uh, but not the Savannah and covered a lot of water, pulled a lot of beautiful flats. I mean, stuff I’d never fished. I mean, I’m not even ashamed to admit. I mean, we all get in a groove where we like to fish certain areas. And you know, I’ve fished pretty extensively from Savannah all the way down to st Augustine, but there’s so much water up here, it’s hard to fish. And I took my drone and, um, we polled flat after flat after flat. And then on the way back we poled into an area that we had pulled on, outgoing. It was beautiful. The tide was just coming in. And, I said, man, let me just fly the drone through these little feeder Greeks and let’s see if we see anything. And we did not see a single fish yesterday. Um, I think Georgia is beyond the point where we need to make some limit changes, uh, for our Creel limits.

I know I’m probably going to get some back feed on that, but you know, I was telling somebody this morning, I’ve gotten the regulations for Georgia here. This is 19, but I don’t believe anything has changed that I know of for 2020. Um, you know, red fish is 5 per person here in Georgia. 14 to, what is it, 23 inches. Florida has multiple zones now, but the Northeast corner of Florida, that Jacksonville area downto st Augustine is still two per person. The rest of the state is one. South Carolina used to be five per person. They dropped it down to um, two and the fishing really rebounded. So they bumped it up to you know, three and then they realize, wow, this isn’t working. Our stocks are, are going down. So from my understanding, they went back to two fish per person, North Carolina. They’re a different animal, you know, they still allow gillnetting and whatnot, but they’re still only one red fish per person.

So, Florida is two and one, South Carolina is two, North Carolina is one and here we are sitting in the middle in Georgia and you know, it’s five. So I think it’s a little excessive. I watched a guy the other day and one of the few creeks that I know that still holds decent numbers are red fish. Um, he had him, a buddy and two small children in the boat. They came in there, they caught a limit of fish in about two hours. Um, and that was throwing back over sized fish and keeping, you know, legal size fish. And, uh, when I stopped to talk to them, I’m hoping I can maybe educate them a little bit because I thought 20 red fish was a little excessive. The guy was very nice. Um, he informed me that he had actually limited out the tape before in the same spot, so they killed 40 Redfish out of a small area that, you know, might have a hundred, 150 fish in it.

And we get, we get definitely see a difference that day. I’ve been back once since and I’m not seeing the numbers of fish that I normally would see in there. So unfortunately that Creek is probably on the downfall, um, such as so many other places, you know, and that’s what we talked about yesterday is flats. They used to just flourish with big schools of Redfish, um, are completely empty now. It’s not even like there’s a few fish in the school, there’s zero fish in the schools. Um, but you know, it’s just, it’s disappointing. It’s disappointing that as a species we can’t manage our fisheries better. Um, and that we need government to tell us that we, we have to keep less or keep more or whatever. I mean, we should be able to use common sense because we all know as soon as the government steps in, everybody throws her arms up in the air and starts bitching and complaining about the government getting involved.

Well, you know, the government has to get involved. Unfortunately, and I’m not about big government, more government, I’m totally opposite of that. Um, I’m actually more about small government, but you know, that’s not the, you know, that’s not there or we’re in and we need, uh, we need people to use more common sense. Some the guy didn’t even realize is that none of those fish that he was keeping, and if anybody’s watching this video that doesn’t know a lot about red fish, red fish don’t actually start spawning until they become adults. And that, that range does vary. I mean, it can be a 30 inch fish. Um, and, um, but the bottom line is, is that fish needs to be, I think it’s four, five, six years old. Sure. Somebody could correct me in the comments or I could call one of my people at DNR that I know Chris or one of those guys, but you know, the bull reds that live out in ocean and come in in the spring and fall.

Those are our fish that reproduce. And what’s happening in Georgia is we’re getting less fish in shore that are making it to the ocean that are becoming spawners. And then our spawning stocks seem to be getting smaller from what we’re seeing as well when we’re fishing for the big red fish and whatnot. And so we’re getting less juveniles, less eggs coming off of a smaller spawning stock in shore. And every year we’re getting less and less fish going out. I mean, the escapement had, I mean, it’s gotta be low. I mean, we’ll get a good spawn one year and there’ll be tons, a little 14 inch red fish around. And then all you see for three months is, you know, people bringing in coolers full of juvenile Redfish, you know, 14 to 16 inch red fish. So, you know, I’m all about taking a few fish home to eat, but I’m even more about sustainability in a healthy fishery for everyone to enjoy.

So I’m not going to ramp ramble on too much about that. But you know, just remember when you’re out there fishing for red fish and you catch a 25 inch or a 22 inch or 16 inch Redfish before you go keep it on legal size Redfish and fill in your cooler full on. Remember that fish is never reproduced. He’s never spawned. He hasn’t reached that age yet. So, you know, if you’re not going to eat one fresh and you plan on taking them home and freezing them, do yourself a favor. They don’t eat as well frozen. Let a few of them go. Um, you know, fishing is a past time that we spend with friends and family. Uh, it’s how friendships are made and uh, it’s how people bring their kids up. And, um, you know, I’m starting to actually worry that some of it might not be here.

Um, you know, when I’m older there’s, there’s something that is really interesting that I encourage anybody to look up, but it’s called shifting baseline. And, um, it talks about how the baseline of the youth today is different, whether it be fish docks or trees or whatever, anything deer there, there’s less of something. Um, so it’s all they know. And captain Gary Altman used to tell me about the amount of Redfish and trout that were here when he was younger. And when I started guiding here, our fishery was second to Louisiana. I mean, we had huge schools of Redfish and Georgia was known for, you know, red fish in the seven to 1213 power range in shore. We had nice sized, you know, we had great inshore red fishing schools and schools and schools on the flats and we just don’t have that anymore. Um, so, you know, I thought when Gary told me that, I used to think, God, how could it have been any better?

And then now when I go into the local fly shop, I hear the youth and the younger generation talk about, you know, great the day was, and I ask them what they saw and they say, Oh man, we, we fished a school. It probably had 20 or 30 Redfish and we call it three. And the only thing I can think is how that just sucks. You know, I’ve got videos and pictures of schools have hundreds of Redfish on the flats. People used to doubt me until I started putting videos up. Um, and it’s just, it doesn’t exist. Not that I know of anymore. And not that people that spend hundreds of days a year on the water, no of, so just keep that in mind. Um, that’s just today’s the alleged location. I want to tell everybody about what we talked about this as being the regulations and why I think the whole thing should be overhauled.

But I’m in state waters. You can keep five reds. You can keep 15 black drum, 15 trout, 15 flounder, flounder only need to be 12 inches. You can keep 25 spot Whiting have no size limit and it’s unlimited. You can keep as many of those as you want. Um, you know, said speckled trout. Let’s see. Black Trump flounder. You know, the main things we fish for in shore, the limits are just crazy compared to other States. I mean, one person can keep 15 black drum or 15 trout or 15 Sheepshead, I mean, who needs 30 filets of fish to eat from one fishing trip? I just, I don’t get it. Maybe you guys can enlighten me. Please subscribe to our videos. That’s all I’m going to talk about today. Hope you guys enjoy it. Until next time, tight lines. Don’t forget to visit our website@asoutheasternangling.com our Instagram page, which is at Southeastern underscore, angling, and of course our YouTube channel. Take care.