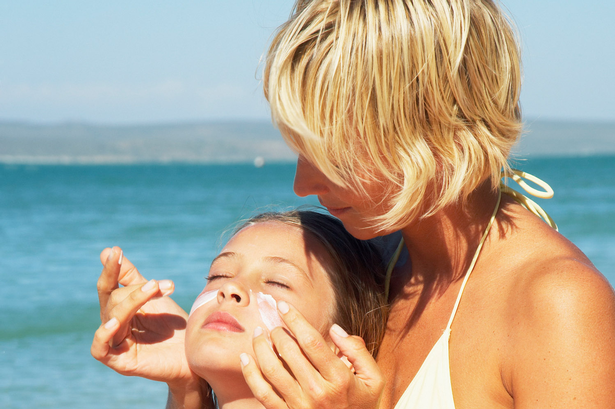 Before your read below know that sunscreens also damage boats, GPS Screens, Sunglasses, vinyl cushions, and clothing just to name a few things.  Also the article below was reposted from the Website http://www.collective-evolution.com.  I am not the author but share the same concerns.

“EXCUSE ME WHILE I LATHER MY CHILD IN THIS TOXIC DEATH CREAM.” (SUNSCREEN)

Summer is here, and now is the time we see massive amounts of people lather themselves up with sunscreen, alongside corporate marketing campaigns that stress the need of protection from the sun. Sure, we do indeed need protection to prevent sunburns, but you don’t want to block out all of the sun. It’s rich in vitamin D, and provides a number of other health benefits, which includes fighting cancer. It almost seems as if we’ve been made to fear the sun, and, as a result, adults and children are being drenched in a bath of toxic hormone-disrupting chemicals.

Why is this a concern? Well, it’s a concern because science has long shown that it doesn’t take long for whatever you put on your skin to enter into your bloodstream. For example, a fairly recent study published in Environmental Health Perspectives shows a very significant drop in hormone-disrupting chemicals that are commonly found in personal care products, after switching to ‘cleaner’ products. These chemicals include oxybenzone, triclosan, parabens, phthalates, and more. The significant drop was seen after urine samples were conducted. You can read more about that and access the study here. All of these ingredients are found within most poplar sunscreens.

So, the next question becomes, are the ingredients used to make sunscreen, which are entering into our bloodstream, something to be concerned about? The science given to us by the corporations will say that no, there is nothing to be concerned about. By now, one should know not to trust these corporations when it comes to their product explanations. It wasn’t long ago that Johnson & Johnson was recently found guilty of knowingly having a cancer-causing baby powder on the market. You can read more about that here.

This is precisely why we wanted to bring attention to an  article written earlier this month published by the Huffington Post titled: “Excuse Me While I Lather My Child In This Toxic Death Cream.” In it, mother Sarah Kallies expresses her concern of the problems that are brought up with everything these days, and that we live in a world where everything seems to be bad for you. She expresses how being pro-active is not wrong, and that caring about these issues is not wrong, but that she is just ‘tired of it all,’ and how she doesn’t know if she is ‘getting it right.’ It carries the tone of ‘not caring’ and ‘what are you going to do at the end of the day.’

It was a great article, and it highlights the fact that we are dished a wealth of information that differs from source to source, on a variety of different topics. That being said, things that surround every aspect of human life that are potentially fatal to us and contribute to the rise in cancer, I’d think that’s one thing, out of many, that we should be paying attention to.

A number of studies have raised concerns about various chemicals found within sunscreens. Below are a few examples.

This could in fact be the most troublesome ingredient found in the majority of popular sunscreens. It’s used because it really absorbs ultraviolet light well, but it’s believed to be a major cause of hormone disruptions and cell damage, which could in fact promote cancer.

According to the Environmental Working Group:

“The chemical oxybenzone penetrates the skin, gets into the bloodstream and acts like estrogen in the body. It can trigger allergic reactions. Data are preliminary, but studies have found a link between higher concentrations of oxybenzone and health harms. One study has linked oxybenzone to endometriosis in older women; another found that women with higher levels of oxybenzone during pregnancy had lower birth weight daughters.”

It’s true, which is why it’s important to do your research, as there are many studies out there on this chemical.  For example, one study done by the Department of Clinical and Experimental Endocrinology at the University of Gottingen in Germany observed regulatory effects on receptor expression for oxybenzone that indicate endocrine disruption (hormone disruption).

A study out of the Institute of Pharmacology and Toxicology from the University of Zurich determined that oxybenzone, which blocks ultraviolet light, may mimic the effects of estrogen in the body and promotes the growth of cancer cells. (source)

A study out of the Queensland Cancer Fund Laboratories at the Queensland Institute of Medical Research in Australia recognized the significance of systemic absorption of sunscreens prompted by multiple studies. Researchers discovered that oxybenzone inhibited cell growth and DNA synthesis and retarded cycle progression in the first of the four phases of the cell cycle. They determined that sunscreen causes mitochondrial stress and changes in drug uptake in certain cell lines. (source)

A study published in the Journal of Health Science by the National Institute of Health Sciences in Japan examined UV stabilizers used in food packages as plastic additives. They found that some UV stabilizers in sunscreen products have estrogenicity in an MCF-7 breast cancer cell assay as well as an immature rat uterotrophic assay. They tested a total of 11 UV stabilizers. 20 kinds of benzophenones were tested using the same assay to demonstrate their estrogenic activity.  (source)

A study conducted by U.S. government scientists suggests that retinyl palmitate, a form of vitamin A, may speed the development of skin tumors and lesions when applied to the skin in the presence of sunlight (NTP 2012). “Retinyl palmitate was selected by (FDA’s) Center for Food Safety and Applied Nutrition for photo-toxicity and photocarcinogenicity testing based on the increasingly widespread use of this compound in cosmetic retail products for use on sun-exposed skin,” reads an October 2000 report by the National Toxicology Program. (source)

This suggests, according to Dr. Merocla, that sunscreen products could actually increase the speed at which malignant cells develop and spread skin cancer, because they contain vitamin A and its derivates, retinol, and retinyl palmitate.

Sun Exposure Can Protect You From Cancer

The Sun isn’t as bad as it’s marketed to be, however; that’s more so an attempt to encourage people to buy products. These corporations don’t really have an interest in protecting us (we’ve seen multiple examples of this). They just don’t care, and they would never tell us that sun exposure can actually protect against cancer. This has been made evident by several studies, which have confirmed that the appropriate amount of sun exposure can actually protect us against skin cancer. (source)

As many of you probably already know, humans require sunlight exposure for vitamin D. Sunburns do indeed cause a concern, and there are many studies that link sunburns to melanoma. Due to different factors, such as cultural changes and fear mongering, our skin is not used to large amounts of sun exposure like it was in the past. If you spend a large portion of your time in the sun, your skin adapts to build a natural immunity. We are naturally built to receive sunlight, and we have gone backwards in this regard. There are alternative ways to protect yourself from sunburns. You can buy natural sunscreens without harmful chemicals. Questioning big name advertisements is crucial to our health in these times of information awareness.

The depletion of the ozone layer only happens seasonally, in winter and spring. We are generally not out in the sun at this time, and do not usually apply sunscreen.  There are people who get melanoma who are less exposed to the sun than others. Research also shows that incidence of melanoma increases in people who are not exposed to the sun. The lack of vitamin D has a strong correlation to melanoma instances.

Only 10 percent of all cancer cases are attributed to all forms of radiation, and UV is a very small part of that (source). When we think of skin cancer we automatically want to blame the sun, but what about other causes of skin cancer that are out there such as arsenic, found in a number of things we ingest or work around (source). Not to mention pesticides, leather preservatives, and glass.

Sunscreens are a huge contributor to toxins in the body, being absorbed within seconds of application. Is it not important to know what you are putting into your body? We now live in a culture where we fear the sun, which is ironic considering it has created all life on Earth. It’s important to remember that fear eventually manifests as reality. The sun has many health benefits so using natural products will ensure that you receive these benefits while keeping your skin safe, ensuring that you aren’t absorbing the dangerous chemicals found in most sunscreens today.

When shopping for sunscreens, be sure to read the labels and avoid buying sunscreens containing toxic chemicals. It may be tough to find, but a trip to a natural health store can often do the trick. Look for sunscreens that contain zinc and titanium minerals as opposed to the active ingredients listed above. Remember, the best sun protection is wearing clothing to protect you and finding shade. Only use sunscreens when absolutely necessary. It is not necessary you wear sunscreen every time you are out in the sun. Sunscreen does NOT allow the body to absorb any vitamin D from sunlight. So if you plan on being outside for a short period of time, skip the sunscreen and feed your body the vitamin D that will keep it healthy.

Have you tried using coconut oil as sunscreen before? Or do you use other natural products? Share your results with the community as it’s very helpful for those of us looking for healthier options.